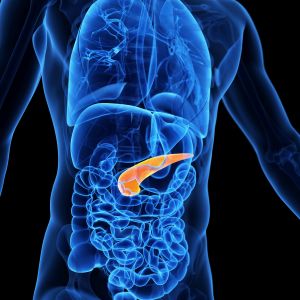 The pancreas is an important gland located between your spine and your stomach. It is surrounded by the intestine and liver. The pancreas produces hormones, including insulin, that help the body use energy from the food we eat. Also, the pancreas produces digestive enzymes that are released through a bile duct into the small intestine.

Problems with the pancreas are often caused by inflammation (pancreatitis), or a tumor. Tumors usually arise from the pancreas or surrounding bile ducts.

Acute pancreatitis caused by gallstones may go away once the gallstone passes into the lower intestine. If the gallstone blocks the pancreatic duct, it may need to be removed with a minor surgical procedure called an ERCP, a specialized form of endoscopy. This is usually performed by a Gastroenterologist, a doctor who specializes in medical disease of the intestinal tract. The endoscope, a lighted surgical tube with a TV camera on the end is inserted through the mouth and esophagus. When the endoscopist gets to the pancreatic duct, he uses an instrument (part of the endoscope) to remove the gallstone.

On rare occasions, pancreatitis requires surgery to remove the dead pancreatic tissue and clean the area around the pancreas. Patients who need this surgery have prolonged hospital stays.

Surgery for pancreatic cancer is a major operation that requires removing part or the entire pancreas. Patients need to stay in the hospital for several days afterward. Operations performed usually include a Whipple procedure or distal pancreatectomy. The latter may be performed through minimally invasive means (laparoscopy) in some circumstances.

Since the pancreas produces insulin and the enzymes and hormones that your body needs for digestion, removing part of or your entire pancreas can decrease the amounts your body needs. Diabetes may result if not enough insulin can be produced after surgery or severe pancreatitis. You may need supplements for insulin, hormones, and enzymes.